The Fall of Grace, by Amy Fellner Dominy 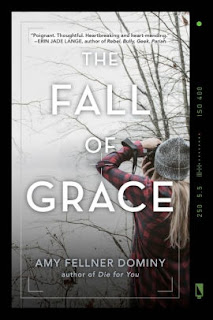 When Grace’s mother is accused of running a Ponzi scam, only Grace believes in her mother's innocence.  And when Mom suffers a stroke during her arrest, she’s not there to explain herself so the weight of defending her falls on Grace.

But it isn't only her mother who is going under scrutiny.  After all, Grace benefited materially from her mother's malfeasance. And her association was not entirely benign and innocent.  Grace may have had no direct knowledge of the scam but all through her life, Mom put her out literally front and center, featuring little Grace on the cover of the prospectus.  Suspicions mount that not only did Grace herself know what was going on, but also that she has knowledge of to where the money has disappeared.

Now, months later, Grace has boarded a bus to travel to a place that she believes has answers.  She is tailed by Sam, a loner boy at school with a dead older brother who suspects she is going to collect the missing money.  While she tries to convince him that it is nothing like that, she can’t tell him her secret -- why she is driven to visit a remote location high up in Colorado.  But sharing secrets is what they will do as Grace and Sam risk everything to complete Grace’s desperate quest.

An interesting story that never quite worked for me for two reasons:  the unending brutal horror of the way people turn against Grace (told mostly in flashback) which never really reaches any sort of redemption; and the attempt to spark a romance between Grace and Sam.  I get that they are both outcasts and they both have issues, but I couldn’t care enough to want them together or be happy as they reached any sort of connection.  Plus, how utterly cliché!  So, the story was just a bit too cheesy for me.
Posted by Paul at 1:00 PM