The Line Tender, by Kate Allen 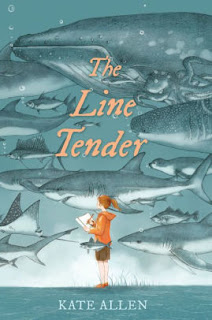 When a fisherman hauls home a great white shark that got snared in his nets, Lucy and her friend Fred are entranced by the creature.  The kids have been working on a field guide to local birds and animals and both of them love nature.

It doesn’t hurt at all that Lucy’s mother was a marine biologist who specialized in great white whales.  For Lucy, studying them now is a way of getting close to her late Mom.  And when tragedy strikes and Fred is killed, Lucy escapes into that interest in sharks, drawing sketches of them and writing postcards to her deceased friend.  She also meets former colleagues of her mother’s who carry on her mother’s work.

Richly illustrated with sketches of sharks, the book is more of a paean to sharks than a story about a girl who is struggling with grief, although both threads are important.  I found it meandering and unfocused, but it has some charming passages, including the explanation of the title (a reference to the watch on a dive who takes care of guiding and retrieving the diver).  It’s nicely written, but hard to track.  I was disappointed.