The Weight of the Stars, by K. Ancrum 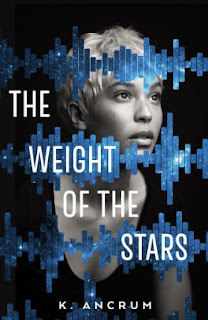 Ryann is so busy taking care of her family and her set of misfit friends, that she barely has time to worry about the things she can’t have.  She dreams of traveling to space, but aside from a quirky opportunity a few years ago when a group of young women were sent out on a one way trip to the stars, opportunities don’t come often.  Stuck in her trailer park and barely getting by, she’s hardly the Right Stuff.

But then a chance encounter with a new girl named Alexandria changes everything.  Alexandria is the daughter of one of the women who went into space.  She was world-famous at the time of her mother's departure because she wasn't supposed to exist. If people had known that one of the women leaving on a no-return trip was the mother of a newborn, they never would have stood for it.  So the situation was kept secret until it was too late: her mother left and abandoned Alexandria on Earth.

Years later, Alexandria stays up at night monitoring the skies, hoping to hear a message from her mother transmitted over the growing distance between them.  For Ryann, Alexandria becomes another project, but she also is a key to future that Ryann had almost given up on.

A gentle meditative novel that is full of lots of clever writing, but not very coherent storytelling.  Lots of originality here and the mixture of angst and science fiction is interesting, but the afterward where Ancrum explains the symbolism of each of her characters underscores the problem:  if those messages were there, I should have been able to find them without the lecture.  In retrospect, I began to understand parts of the book that made no sense when I first read them, but that is too much work for the entertainment I was seeking (and given the large number of loose ends, the overall payoff for looking back is relatively meager).  It really isn’t enough to be a good and clever writer, you also need to be able to tell a story.
Posted by Paul at 1:54 PM