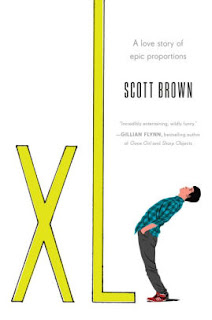 Will knows what it means to be looked down upon.  At 4’11”, he’s stuck wearing kid’s clothes.  His stepbrother Drew towers over him at 6’3” and their mutual friend Monica is 5’11”.  Still, Will has big ideas that are all part of The Plan that the three of them have to go to school together after high school, with Drew landing a star turn on the basketball team (even Will doesn’t dream that big for himself!).  When Will makes things complicated by trying to make a move on Monica, he finds that suddenly Drew and Monica are an item and he has been relegated to the short sidekick.

Then the story takes a sudden twist.  Will starts to grow and grow and grow.  He quickly shoots through normal heights and surpasses Drew and just keeps growing.  There seems to be no limit to how large he can grow.  But with big things come big responsibilities.  Things (like The Plan) that were so simple before have grown complicated as all three of them are changing.

Boy books tend to be noted by two characteristics (both of which are present in this book): snarky gross humor and the pedestaling of the love interest.  Whether this is because they are written by male authors (guys who find jokes about semen amusing and can’t create believable female characters) or because we all think that this is what boys want to read (News flash! These books are mostly read by girls!) is up for debate. Admittedly, the book is pretty funny and that certainly makes it easy on the eyes.  But the Monica character is amazingly frustrating.  Like Alaska in John Green’s classic, Searching for Alaska we don’t much chance to know what is going on in her head except that she is pretty angry that Will and Drew don't get her.  As a cipher, she comes off as contradictory and illogical and largely unfathomable.  This is in striking contrast to the boys who seem to be quite articulate and easily read each other.
Posted by Paul at 10:00 AM