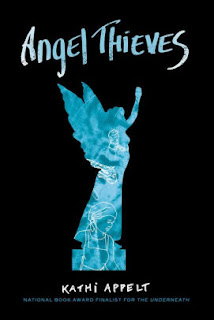 The Buffalo Bayou is a landmark of Houston and in this rather dreamy novel, Appelt uses it as a means of telling four different stories that cross time periods but still overlap.  There's Cade who, along with his father, steal angel statues off of forgotten graves.  Soleil is the sweet girl who falls for him and wants to believe in him.  A hundred and sixty years earlier, a former slave is trying to smuggle her two little girls to safety in Mexico.  And back in the present, an ocelot in a cage fights for its survival as the Bayou's waters rise up.

If those seem pretty disconnected, they largely are. Not that it really matters as Appelt is mostly in love with the concept of the Bayou as a swiftly flowing body of water that shifts and surges, swallowing up (and occasionally disgorging) objects and people.  She's so in love with the idea that she repeats it again and again. Repetition is key in this story and established themes are repeated again and again like a piece of music.  The issue, for me, is that what works nicely in a score comes across as boring in a story.  Most of all, as pretty as this book is, it is not a YA book and it is poorly marketed.
Posted by Paul at 2:37 PM