Boys of Summer, by Jessica Brody 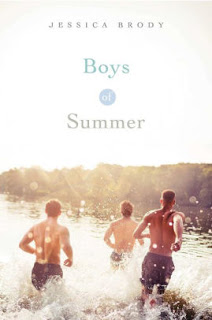 Grayson, Mike, and Ian have been best friends since they were children.  As residents on a vacation island, the summers have always been an adventure of dealing with the tourists.  But this last summer together promises to be very different.

In the past year, Ian's father was killed in Afghanistan and, while relations between he and his mother are strained, he seems alright to the others.  Mike and Hunter have been a pretty permanent couple for years, but this time it looks like their little break-up could be permanent, especially because Grayson and Hunter have started to secretly hook up.  Grayson, meanwhile, has to find the strength to admit to his father (and himself) that the little injury he sustained has ruined his ability to play football and jeopardized any possibility of taking the football scholarship that was supposed to get him through college.  There will be girls (of course), family conflict, and lots of bonding and secrets in a final summer together.

In other words, it's a girl's book about guys.  If there's anything funnier than how misportrayed female characters are by male authors, it's just how awfully bad female authors can get young men.  It's not really Brody's fault in this instance, but more like an impossible project:  create a story of friendship between young men that would be relatable to young woman readers.  They're a sensitive trio, all of them terribly worried about how the others feel and trying to avoid hurting each other's feeling.  In a mild nod to testosterone, there's a bit of fighting, but it's usually about protecting others (usually women) than about ego and pecking order.  Most silly of all is the alleged "Guy Code" that you can't date each other's ex's.  I have no idea if girls have such a thing for real (although you hear it invoked in plenty of books) but I can say with some certainty that guys don't believe in such things.  Grayson, Mike, and Ian could just as easily been Taylor, Micaela, and Iona and very little of the story would have need to be altered.  But then, it would just be a sweet beach romance of three BFFs enjoying their last summer before college, which come to think about it, it basically is.
Posted by Paul at 12:30 PM