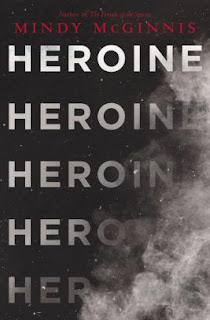 When star catcher Mickey and her best friend Caroline (their team's pitcher) are seriously injured in a car accident, the girls are terrified that they won't heal in time to play for their senior year.  It is going to take a lot of work and a lot of pain to rehabilitate.  But Mickey discovers that the Oxycodone she's been prescribed really helps.  It works even better when she ups her dose.

But when she uses up her entire prescription, she finds that she can't get any more from her doctor.  Without it, she won't be able to push herself as much as she feels she needs to in order to be able to play. So she resorts to drastic measures, finding an old lady who's selling drugs dispensed for other people.  With this new source, Mickey starts increasing her doses gradually as the lighter doses are no longer enough.  Mickey has to turn to stealing and deception to maintain her supply, but all along she is convinced that she'll be able to stop just as soon as the season is over.  But then she finds that she can't quit.

A brutal and frank description of addiction and the process of falling into it.  As a story, it's pretty bleak stuff.  McGinnis does a great job of depicting Mickey's demise, the ease at which she ignores warning signs and the way she convinces herself that she'll be okay.  It's a bit matter-of-fact to be art, but works fine as an educational primer and a warning to any young people who are feeling invulnerable.
Posted by Paul at 3:54 PM