Opposite of Always, by Justin A. Reynolds 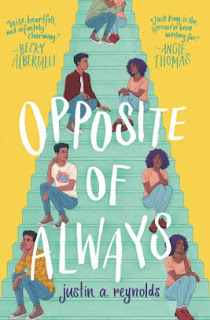 Jack meets Kate at a party during a weekend visit to Whittier, the school he plans to attend.  And Kate is the best thing that's ever happened to him.  Unlike his best friends Franny and Jillian who have each other, Jack has always just missed a happily-ever-after story.  The next four months though are amazing!  Sure, Jillian and Franny both have their rough patches, but things are mostly great for Jack and Kate...until she unexpectedly dies.

Suddenly Jack finds himself back at the party, the same party where he first met Kate four months ago.  He's been given a do-over. Like Bill Murray's character in Groundhog Day, Jack is condemned to relive those four months all over again.  And, again as in that movie, Jack tries to tweak the outcome to make things turn out better.  But this isn't a comedy and Jack finds his choices each have consequences -- some of them dire.

While the gist of the story has been done before, the angle here is different.  For Jack, there is a lot to learn about love, friendship, family, and loyalty.  Being a boy book, the relationship stuff is mostly about keeping appearances and pride (rather than tears and jealousy) but the complicated family relationship of Franny and his jailbird father is just one piece that gives this novel a serious tone.  There really isn't much doubt of how the story should end (and it delivers) but there is a very satisfying dramatic arc of personal growth for Jack.
Posted by Paul at 11:16 AM