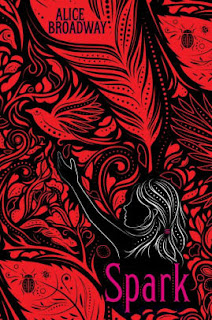 It is now the day after Leora Flint's grand reveal, the event that formed the finale of Ink (reviewed here on June 21, 2019).  Leora faces exile, but Mayor Longsight's given an alternative: go into the forest and find the Blanks (the heretics who don’t ink their skin), uncover their plans and preparedness for war, and report back.  Leora knows she's being manipulated (and probably betrayed), but as in Ink she really doesn't have an alternative:  the Mayor and his henchman Minnow hold her family and friends hostage.

For Leora, it is also a chance to learn about her roots and maybe uncover the truth about her real mother.  Eager to determine how the Blanks have gone so far astray and understand their hostility to inking and to her people, good can come of this mission.  What she finds is very disturbing to her.  The Blanks, far from being evil, turn out to follow a very similar belief system as hers.  Their canon of myths and fables are strikingly similar to the ones that Leora was raised on, but just slightly different.  The differences, however, are crucial and form the crux of the schism that exists between the inked people and the Blanks.  It's a difference that brings the threat of war -- a conflict which is being fed and encouraged by forces that Leora is yet to understand.

As the second book in a (presumed) trilogy, readers will understand that there is no resolution or ending quite yet.  Similarly, it really helps to read these books in quick succession to keep up with the complicated relationships between the characters. So, what have we learned in this installment? The themes of family loyalty and adherence to faith continue, but Leora’s challenge now is finding her faith in a sea of doubt. Scepticism is the main theme of part two. Presented with the small but nonetheless striking differences between the beliefs of the Blanks and her home, Leora feels pressured to choose between them (the faith of her upbringing vs the faith of her ancestors).  She's resistant and ultimately led to question whether either tradition is right for her.

I'm enjoying the way that Broadway has not only created a very original setting for her story, but also done so much more with it.  The action is compelling and the various crosses and double-crosses dizzying, but underneath it all is a novel that explores faith.  Leora's questioning of her childhood convictions will resonate with anyone who has ever grown up (or is facing the process now).

[Disclaimer: I received an Advance Reviewer’s Copy of this book from the publisher in exchange for an unbiased review.  The book was originally slated for release on July 30th, but has already been released]