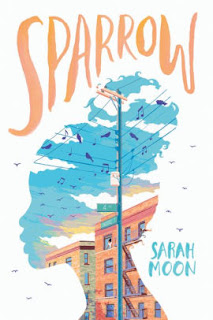 When they find Sparrow standing on the edge of the roof of her school, everyone presumes that she was planning to jump.  She knows she wasn't.  She was planning to fly away like a bird.  But if she tells anyone that, then they will know she is crazy!

The thing is that Sparrow has always found talking about things to be hard.  And ever since her traumatic first day of school, she's generally avoided talking to others. Instead, with the support of a friendly librarian, she's found a way to avoid social situations and conversations in general. This has gotten her a reputation for being a snob and made her a target for bullies and hasn't exactly kept people away from her.

The rooftop incident sends Sparrow into counseling and her persistent counselor finds that the key to break through Sparrow's insecurity is through music (the angrier the better!).  The doctor goes on to suggest that Sparrow attend rock band camp this summer.  The idea astounds both Sparrow and her mother, who both know that Sparrow will never survive away from home, living with strangers, for four weeks.  But the counselor is convinced that this is just what Sparrow needs.

A sweet and inspiring story of a girl who finds the strength to face the world and embrace it.  There are no surprises here, but the story is well told, with good characters and a bit of fun.  Perhaps more could have been done with Sparrow's love of birds, but Moon's answer is that freedom lies in music, not ornithology.  I might beg to differ, but the point is well taken.
Posted by Paul at 7:38 PM