How It Feels to Float, by Helena Fox 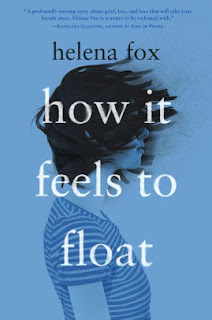 Almost ten years ago, Biz lost her father to depression.  While his suicide made her sad initially, she felt better when he came back to her and spoke to her when she needed him.  This was not so unusual for her.  Lots of other things speak to her: the ocean, the photographs she takes with Dad’s old film camera, and so many other things.  But what about the new boy at school with a mysterious limp?  The one who rescued Biz from the waves when the ocean was convincing her to join it?  He doesn’t speak to her, but she wishes he would!

After a traumatic event pushes Biz into outcast status and gets her suspended from school, her happy world collapses around her.  Lost in depression, she determines that the only thing she can do that would make any sense is to seek out the places where her father lived and see if they (or him) would speak to her again.  So, she goes out on a quest to find her father and join him under the water…where he drowned himself.

A fresh, albeit occasionally creepy look at life with inherited psychosis.  As Biz makes her own descent into madness, she's all too aware that she’s following her father’s path, but less and less concerned about what that could mean for her.  There’s something quite gentle and beautiful about the way that her world falls apart, which makes the journey all the more terrifying.  The reader is forced to take the plunge with her.

In a field with a lot of similar books about mental illness, I found Biz a compelling character and the story an excellent read.
Posted by Paul at 11:19 AM