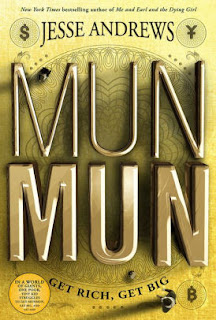 In this most striking science fiction novel of 2018 that you've never heard of, Mun Mun describes a world where your net worth defines your physical size.  Based on the amount of "mun mun" (money) you have, you can be anywhere from the "littlepoor" (about the size of a squirrel) to "bigrich" (where the sky's the limit on size and height).  Being as small as a rodent has some significant disadvantages, ranging from having trouble working at a normal job to simply not being eaten as a snack by a free-range kitty.

Littlepoors Warner and his sister Prayer have dreams of making some mun mun of their own and maybe becoming middlepoor some day, but their plans run astray and Warner ends up in jail.  But then a well-meaning family of middleriches rescues him, trying to prove that, with a little mun mun, anyone can pull themselves out of poverty and littleness.  But as the author grindingly makes clear, mun mun by itself can't change the legacy of who you are and where you came from.

With a wit that owes much more to Jonathan Swift's satire than any modern day dystopian novel, Andrews says a lot about class, privilege, and the inherent flaw in so many well-intended attempts to "fix" these social evils.  The result can be depressing at points, but just as Gulliver's Travels was able to say so much of contemporary relevance in its day through fantasy, Andrews knows that the message is so much clearer when you are not expecting it.  It's unwillingness to embrace either Left or Right will probably upset some folks, but there's little to argue with here.

The ending grows a bit weird as Warner becomes unhinged from his suffering and his character transforms to a dark anti-hero with whom it becomes hard to identify and sympathize, but the originality and biting observations of this allegory make this novel a stand-out work.  It's a largely neglected book that deserves a wider audience.  Highly recommended.
Posted by Paul at 7:26 PM