Not If I Can Help It, by Carolyn Mackler 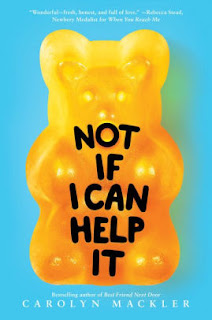 Willa has issues with things around her that feel wrong.  A sensory processing disorder makes certain sights, sounds, smells, tastes, or feels for her entirely unbearable.  Every day is a struggle but through routine she is able to manage her adverse reactions.  But any change is a challenge.  She definitely doesn't like changes!

So when her father announces that he’s dating again, Willa isn't happy.  Worse, his girlfriend isn't some stranger, but rather the mother of Willa’s BFF Ruby.  Willa is not OK with the idea of Dad having a girlfriend.  As much as she loves Ruby, she doesn’t want Ruby to be her sister.  But change is in the air and Willa has to learn to cope with it.

A short, but well-written middle reader about a condition that I don’t believe has been touched on before.  Willa's hypersensitivity can make her seem difficult, but Mackler navigates that challenge well, showing how difficult these situations are for her.  At the same time, everyone’s a bit too perfect for my tastes (Willa’s parents in particular deserve some major reward!), but it’s a kind story that really just is focused on Willa’s difficulties.  That might be the bigger issue:  while we get a good picture of Willa’s struggles, there’s not much growth here.  So, the pattern is Willa finds out about a change and then gets upset and then eventually moves on.  Repeat.  That’s actually pretty dull over the expanse of an entire novel.

[Disclosure: I received an ARC from the publisher in return for an unbiased review]
Posted by Paul at 2:52 PM