The Raven's Tale, by Cat Winters 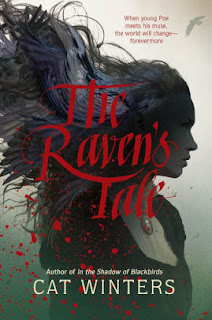 A whimsical biography of Edgar Allan Poe's early years, set mostly on Poe's year away at UVA.  Torn between two muses (one that embraces the macabre and another young Eddy's Byronesque romantic side), Edgar struggles to find his way and choose what sort of writer he wishes to be.  But most of all, he wrestles with his stepfather's aim of destroying his literary ambitions altogether. I call it whimsical because Poe's muses in this story are incarnate, visible, and interacting with the people around them.

An interesting concept that I found hard to get into.  Partly, it is hard to follow the cast of characters (most of whom are based on real people but not being already familiar with Poe's life, were hard to keep track of). Partly, it was the story's uneven pacing.  But mostly, it is the supernatural elements of the story (the muses and their rather corporeal magic, which is itself intended to to have a Poe-like tenor). If I was a Poe fan, then Winter's riff would probably be more meaningful.  But as a story on its own, it just doesn't have much going for it despite the obvious love and dedication of the writer to the hero.
Posted by Paul at 3:32 PM