The Surface Breaks, by Louise O'Neill 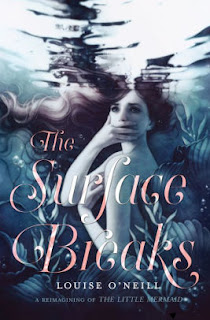 Gaia and her sisters are mermaids, living off the coast of Ireland.  In their society, men are in charge and their duty is to be demure and subservient to men in general and the Sea King in particular.  He in turn uses her daughters to reward his most loyal soldiers.

Gaia, who has just turned fifteen has been informed that she will be given away to the odious (and much older) Zale.  The idea repulses her.  Her mother, who might have stood up for her, is gone.  She was lost many years ago when she went to the surface and was captured and tortured by the humans.

And much more was lost.  It was Gaia's mother who had carefully crafted peace between the mer-people and the wraith-like Rusalki (the spirits of wronged women who skulk in the dark and attempt to lure sailors to their death).  But since her death, the King, Zale, and the other mer-men have been plotting war.

For her birthday, Gaia has been granted the opportunity to go to the surface for the first time.  Mindful of her mother's fate, she is cautious, but nonetheless she becomes enchanted by Oliver, a human boy.  Aware that she has no chance with him in her fishy form, she makes a bargain with a sea witch:  she will be granted human legs but only for a short period.  In that period she has to get Oliver to love her.  Otherwise, she will die.

A grisly and dark retelling of The Little Mermaid with a strong feminist twist that becomes especially pronounced in the ending.  It works but I found the story depressing.  The essential message seems to be:  love is pain and suffering, while freedom from men is death.  It’s well within the eco-feminist cannon (although perhaps a bit more Andrea Dworkin than Susan Griffin), but this isn't usual territory for YA.  Curious and original, but it is hard to imagine this dark and unhappy story finding much of an audience.

[Disclosure:  I received an ARC in return for an unbiased review.]
Posted by Paul at 3:04 PM