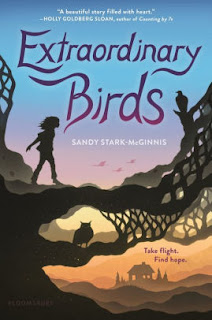 In the time in which December has been shunted from one foster home to another, she's learned never to expect permanency in her life.  But that's alright, because she has a secret:  some day she'll complete her transformation into a bird and fly away.  Birds have simple needs: they only need to survive.  December looks forward to that simpler life.

In the meantime, she's been placed with Eleanor, a woman whose love of birds speaks to December's heart.  Eleanor introduces December to animal rehab work and helps December reconnect with her own humanity.  A subplot involving December's friendship with a transgender classmate hangs awkwardly in the story, but provides some room to expand on December's unrecognized ability to empathize.

Ultimately heartwarming, the story is driven by December's comments about the differences and similarities between birds and humans. Perhaps a bit overly precocious for her age, these observations nonetheless will prove enjoyable to readers who love birds in the first place.  The story of how Eleanor's patient and gentle rescue of December will appeal to everyone.
Posted by Paul at 1:05 PM