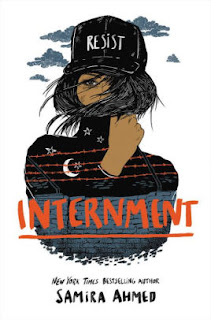 In a near future United States, Muslims are rounded up by the Exclusion Authority and sent to relocation camps, seventeen year-old Layla and her parents among them.  The camp they are sent to is located in a remote desert camp (ironically near by the Manzanar camp used to detain Japanese Americans during WWII).  While Layla's initial concern is with the deprivation of her civil rights, things take a nastier turn is she finds her resistance met with extreme cruelty at the hands of a sadistic camp administrator.

Mixing together elements of Japanese relocation, the internment centers for migrants and asylum seekers of the current day, and tossing in familiar current politics, Internment is a dystopian with a no-apologies agenda.  That has gotten it a lot of attention from both sides and can make reviewing the novel a bit of a challenge.  I'm more than sympathetic with the political agenda, but overall I found this a blunt and exploitative instrument.

The thing about dystopians is that they work primarily because they are subtle.  They can be read a literature, without even considering their political agenda.  But there is nothing subtle about this novel.  Like a social media echo chamber, this is all about momentary indignation with atrocity layered on top of atrocity.  Occasional moments of reasoning and insight exist in the story, but they get swept aside pretty quickly for latest outrage.

The most egregious problem for me, though, wasn't the dumbed-down politics, but the adversary.  The camp administrator (whose obesity is excessively mentioned) is so over-the-top and such a paper tiger that he’s basically comic relief.  That provides a way-too-easy way out in the end. If Ahmed really wanted to write the “courageous” book she claims to have written, she would never have made evil so easy to wipe out.  The evil that would create these camps is not going to be defeated by people chanting slogans, it’s going to take some hard looks at the forces that drive people to accept such policies.  And it's not as if Ahmed doesn't know this (she brings it up on several occasions) but in the interest of actually resolving institutional racism and xenophobia in the confines of her novel she's oversimplified and then deftly "resolved" the problem.  It's too bad that life isn't that simple and I don't feel that this novel serves any higher good.  At best, this gives false confidence to left-wing Americans that they can defeat Trump simply by saying "resist."
Posted by Paul at 2:11 PM