No Fixed Address, by Susin Nielsen 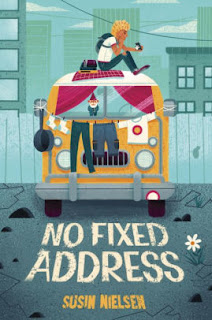 Felix and his mother Astrid have gradually been slipping through cracks in the social net.  Suffering from emotional issues, Astrid can't hold down a job. After getting shuffled from one place to another, they have ended up living in a van, moving it from time to time in order to avoid arousing suspicion.  Felix longs for stability and a fixed address.  With a home, they could have simple things like a bathroom!  At school, he manages to do well.  He has two close friends, but he can't tell them why he can't invite them home for fear that they will report his mother to the authorities.

Felix also has an incredible head for trivia and he's a whiz playing along with the contestants on the TV quiz show "Who, What, Where, When." When the producers of that show announce a special junior edition, he's excited to apply for a slot and ecstatic when he is invited on the show.  But it is the discovery that there is a large cash prize for the winner which raises the stakes.  With that money, he could get them an apartment and help get Astrid back up on her feet.

While I hate child endangerment stories, the book works for me for two reasons.  First of all, because the usual sadistic litany of misfortunes is kept to a minimum.  We get there is a lot of challenges in his living situation but it is not utterly hopeless.  But what really helps is the way that the tough times are countered by sweetness.  Nielsen has chosen to highlight the kindness that people can do for each other. Several times there are opportunities for hard things to get worse (for example, when Felix is caught stealing food) but the story chooses to show people being kind (the grocer, after initially threatening the boy takes him in and feeds him).  The message is that being kind and generous to those truly in need (or even simply decent) can pay off.  The happy/weepy and ultimately satisfying ending doesn't hurt either!
Posted by Paul at 10:56 AM