The Runaway Princess, by Kate Coombs 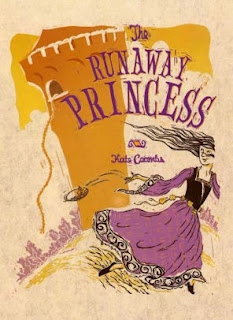 The Kingdom of Greeve is plagued by a dragon, an evil witch, and a horde of bandits. To rid his kingdom of these woes, the King has announced that he'll give the hand of his daughter to whatever prince can do the job.  Princess Margaret, however, has entirely different ideas.  Resentful of being locked away in a tower for whatever prince comes along, she manages to escape and seeks to rid her kingdom of the pests herself, and kick out all the dumb princes to boot!

In fact, it is really the latter that are the greatest problem.  The dragon is just a baby, the witch is kind, and the bandits are simply taking from the rich to give to the poor.  But the princes are a menace!  Prince Vantor, the worst of the bunch,  means to win the competition at any cost, even if it involves kidnapping the Princess.  But with help from her maid Dilly, the gardener boy Cam, and the young wizard Lex, Meg will figure the whole thing out.

Not really sure if it wants to be adventure or comedy, this tongue-in-cheek fractured fairy tale sometimes falls very flat.  Still, it's light and action-packed.  With well over a dozen major characters, the action gets a bit chaotic by the end but I'm pretty sure that everything gets wrapped up.  And Meg even gets to start taking sword fighting lessons (and toss aside her hated embroidery)!
Posted by Paul at 7:47 PM