Alone Together, by Sarah J. Donovan 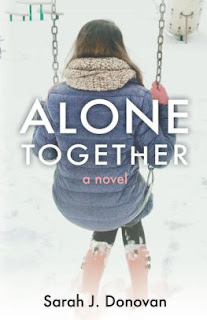 Sadie is the ninth child in a large Catholic family in Chicago.  As the story opens, she's been caught stealing from work, but she's hardly the biggest sinner in her family.  One sister has a girlfriend, another sibling is living in sin, and her younger sister is pregnant for a child of her own.  The older children stay away altogether.  Her Dad is unemployed and moping around the house. Mom seems to be carrying on an affair.  At the best of times, living in such a large family is challenging, if not utter chaos.

Told in verse, Alone Together traces how Sadie finds her own separate identity within this family, both being part of it and also staking out her independence. Family for Sadie is neither a help or a hindrance. While she obviously relishes moments of quiet and at one point marvels over what it would be like to live in a home with fewer people, she loves her family and accepts their presence as it is.

It's a subtle work, with lots of inward thinking (helped along by the verse format which accommodates her scattered thoughts) and little action.  While the poetry does occasionally lean towards poignancy, Donovan is actually quite restrained.  The result is a deep work that has a unique voice -- worldly and informed, but not as jaded as many of today's heroines.  Barely publicized and a bit hard to get a hold of, the book is a quick and rewarding read and deserving of more attention.
Posted by Paul at 1:55 PM