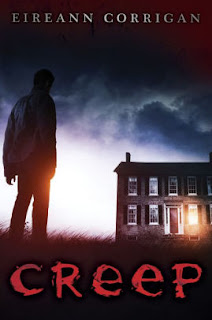 For many years, the Langsoms had been living at 16 Olcott Place, but after a scandal involving Dr Langsom, they were forced to move out.  Next door neighbor Olivia wondered who would move in, and when the Donahues arrive with a daughter her age, Livvie is excited to have a new girl next door.  Janie Donahue and Livvie are both starting ninth grade this year and have a lot in common.  They become fast friends, much to the consternation of Livvie’s existing friends.

And then mysterious threatening letters start to show up at the Donahue house.  Demanding that the Donahues move out of the house immediately, the writer promises that blood will flow if they don’t go.  Terrified, but also obsessed with figuring out what is going on, Livvie and Janice dig through the town’s and her family's history in search of a scary stalker.

My initial impression when I opened the book was that this was going to be some sort of supernatural horror story and I wasn't too enthusiastic about reading it.  But, in fact, the story starts out as a fairly normal YA about two girls having typical friendship and family struggles.  The creepy stuff doesn’t even start until nearly fifty pages in and only ratchets up slowly.  Horror fans will probably be disappointed with what is largely just a book about a new kid in town.  The action does pick up in the end, but the pacing is uneven and the entire ending felt rushed.  That leaves the story a bit confusing as so much of the earlier build up gets lost in the end.  Entire subplots about Livvie's struggles with juggling old friends and Janie or her romantic lead get shunted off and forgotten.  But who honestly would still care about a budding romance when there was a psychopathic killer in the house?  Or about friends who feel slighted?

[I received an ARC of this book from the publisher free of charge in exchange for an unbiased review.  The book was released on October 1st]
Posted by Paul at 12:52 PM