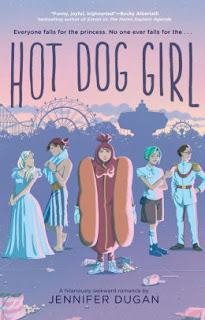 Lou is stuck being the Hot Dog Girl for another summer at Magic Castle.  Walking around dressed up like a giant wiener isn't exactly the way you get your crush Nick (this summer's Diving Pirate) to notice you.  It would seem that he only has eyes for Jessa (the Princess, naturally!), but this is Lou's last chance and she's determined to try.  Nick is going off to college in the fall and the Magic Castle is closing forever after the summer ends.

Lou has plans.  She convinces her best friend Seeley to pretend to be her lover in order to make Nick jealous (everyone knows that Seeley is queer and most folks assume Lou is as well).  As Lou plots it, the two girls will date for a while and then "break up" and then Lou will somehow end with Nick.  Along the way, Lou's also got a plan to save Magic Castle so it won't have to close.  But Lou discovers that even the best contrived plans will go astray, when she realizes that her relationship with Seeley is more real than she had planned for.

Summer stories set at amusement parks have been told often enough that it's almost a sub-genre.  There's not much new ground to cover here!  But the bisexual element of the story is a new angle and its matter-of-fact treatment is nice.  Lou has a complex character and meaningful interactions with Seeley and her father that defy the stereotypes of friendships and parent-child relationships.  The story, however, drifted and wandered too much for me and I found it hard to get into, despite being a brisk read.
Posted by Paul at 2:02 PM