It's Not Like It's a Secret, by Misa Sugiura 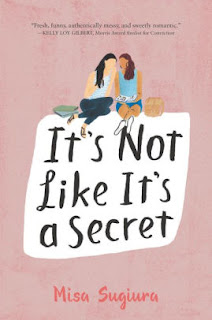 Sana and her family have moved to California from Wisconsin. Her mother says it is because of the great new job her father has been offered.  Sana thinks there is another reason: she suspects that her Dad is carrying on an affair.  Sana has seen suspicious messages on her Dad's phone from a San Francisco area code and her father seems to spend a lot of time "working late." Moving to California will put him that much closer to this person.

Meanwhile, at her new school, Sana has fallen in love and the object of her affection is Jamie, a girl on the school's track team.  Sana never given much thought to her orientation, but she's never quite clicked with boys.  Thankfully, being gay at her new school is not a big deal, but race is.  That is important because Sana is Japanese-American and Jamie is a Latina.  As much as the two girls care for each other, there are tensions between their peer groups. Sana is expected to hang out with other Asians and Jamie with the Mexican kids.

Girl meets girl, girl loses girl, and you know the rest...typical romance. But there's some subtlety and some interesting topics raised. When Sana suspects that Jamie is cheating on her, it is too much like what her Dad is doing to her Mom and this give her time to reflect on what her mother is going through.  Sana's Mom's concept of deferred happiness and forbearance driven by the traditional Japanese value of gaman gives Sana a role model to dissect and to which you can contrast herself.

Finally, there's a race angle.  It's pretty brutal to take the complexities of American racial politics and lay them over the insecurities and petty squabbles of a high school.  And yet, that really is happening.  Sugiura has a good ear for the dynamics of it all and has given the story an authentic complexity which is generally missing in most writers.
Posted by Paul at 11:58 AM