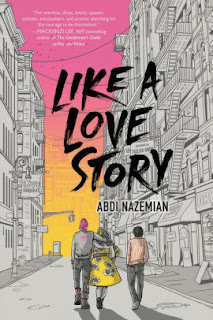 1989.  New York.  While AIDS is no longer a mystery, battling it and stopping the deaths has become deeply politicized. ACT UP activists stage protests and civil disobedience actions around the city, demanding that AZT be made available affordably and that other more experimental drugs be released by the FDA.

Reza and his mother have just moved to the City from Canada.  She’s married a wealthy Wall Street businessman and they have been welcome into the local Persian community.  Reza has gained a stepbrother and a new school.  What he longs for is a boyfriend, but what he fears even more than coming out is contracting AIDS.  Obsessed with the dying of gay men around him, Reza is afraid to open his heart.  He hides his true feelings and tries hard to be straight.

At his new school, Reza meets Art – fearless and a little crazy and sexy as hell -- and his straight friend Judy.  Judy and Art both fall for Reza and Reza (though he is strongly attracted to Art) throws himself at Judy.  He doesn't really like her that way, but he tries to become straight, seeing a relationship with Judy as a way of being socially acceptable and avoiding disease.  It doesn't work and as these three teens fall in love and break each other’s hearts, the reader follows.

A beautifully written novel that will make your heart ache repeatedly.  As is to be expected, there is death in it, but there is also wonderful heartwarming scenes of the living. I approached the book with caution, figuring I would hate it and toss it aside as irrelevant to me, but I couldn’t put it down.  Normally, I have no interest in historical novels, especially those gratuitously placed in recent times.  Far too often, they feel like some a trip down memory lane by an author who has nothing to say.  But Nazemian has things to say.  Important things.  Political without being didactic, the novel approaches the AIDS epidemic and how it was viewed in those days with immense compassion. Ultimately, this is a book about the power of love to get us through life, dying, and death.  I’m calling it the best book I’ve read so far in 2019 (and we’re running out of time to topple it from that position).  Highly recommended, even if you're skeptical that you want to read a book about AIDS.
Posted by Paul at 10:40 AM