Since We Last Spoke, by Brenda Rufener 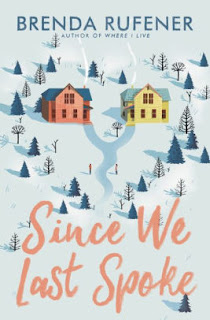 When Cal died in a car accident and his girlfriend Kate killed herself in grief ten days later, it drove a spike between their two families.  The families sued each other, blaming each other for the deaths of their children.  Cal’s brother Max and Kate’s sister Aggi – who had been in their own relationship – were forbidden from seeing each other.  (I’ll give you a guess as to how successful that went!)

Nearly a year later, the families still don’t speak, but Aggi and Max yearn after each other.  But even if they dared to risk the families’ wrath and spoke, what would they say?  Because while they share a similar pain and ache for what they had, breaking the ice is difficult.

An ambitious and strong beginning falls flat in the end.  By the end of the first chapter, I was hooked and totally wanted to see how these two would break through their grief and address their pain and resentment.  The family dynamics would make things complicated I knew, but first and foremost there would be their own emotional baggage to address.  But Rufener is not quite up to the task.  She falls back on melodrama and adventure (a shared adventure brings everyone to set aside their differences) and ditches the inner dialogue of her two characters.  Why does Max bring home girls and flaunt them in front of Aggi?  We never really go there.  Instead, we simply jump forward to an afterword that assures us that the wounds have healed offstage.  Argh!
Posted by Paul at 4:15 PM