Somewhere Only We Know, by Maurene Goo 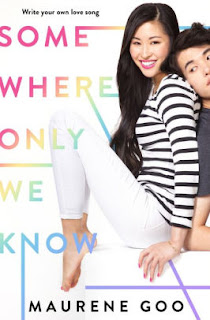 Lucky is about to break it big.  A major K-Pop star, she’s just finished a successful Asian tour and she’s about to come to the States to make her North American debut.  But like all K-Pop singers, her image and her life has been carefully crafted and managed. Somewhere along the way to gaining her success, it all stopped being fun.  On the last night of her tour in Hong Kong, she decides to break free and just try to recapture some of that joy she used to feel in her life.

Jack wants to become a photographer, but there is no way he would ever be allowed by his family.  When he decides to take a gap year, his father insists that Jack work as an intern at his bank.  Jack hates the work, but in the evenings he practices his photography.  He’s discovered a talent for being a paparazzo,taking pictures of celebrities and capturing them in compromising places and positions.

When he spots Lucky, Jack feels that he’s hit paydirt.  Exclusive pictures of the carefully sheltered pop star could be the thing to vaults him to fame and a career.  The fact that she wants to hang out with him just means more opportunities to get photos.  But as the two young people spend the next twenty-four hours touring through Hong Kong, they both find what they are looking for and it isn’t what they were expecting.

By the numbers escapist romance.  There’s not much of a surprise here, but the novel benefits from Goo’s fluid writing, the fun she has showing off the sights of Hong Kong, and two lovable characters.  They are stock stuff, but all the right buttons are pushed.  Enjoyable and fun.
Posted by Paul at 9:36 AM