The Grief Keeper, by Alexandra Villasante 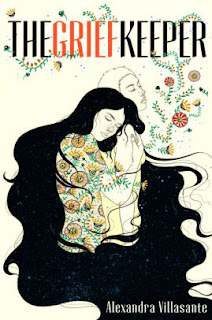 A unique science fiction novel that combines elements of the immigration debate, depression, and an unusual lesbian romance.

Marisol knows that her family has always been followed by La Mala Suerte -- bad luck.  Even when every contingency is accounted for, the luck will find you, Marisol believes.  Nothing proves this better than her current state.  On the run from gangs in their native El Salvador who want to kill her and her little sister Gabi, the two girls have appealed for asylum in the United States.  However, their case doesn't go well and it seems likely they will get deported when they meet a skeptical interviewer and their sponsor dies.

But then Marisol is presented with an unusual proposition.  A mysterious woman who seems to work for the government explains that there is an experimental device that can literally suck the grief out of one person and deliver it to another.  The device is intended to treat war veterans suffering from PTSD.  Its effects on the receiver is uncomfortable, she is told, but not fatal.

In exchange for agreeing to be a recipient, Marisol and her sister will get Green Cards.  Given the suffering they have experienced simply getting to the North, Marisol is willing to do whatever it takes to assure that her sister will be safe.  She agrees.

The grieving person turns out to be a girl around Marisol's age named Rey.  Rey is resistant to the idea of having her depression "cured" so Marisol works hard to win over Rey's trust (after all, if Rey resists the treatment, the deal will be called off and Marisol and her sister will be deported).  To Marisol's surprise, as she gains Rey's trust and the treatment starts to work, their relationship turns romantic.  Is the technology curing Rey or is it the feelings that the girls have for each other? All the time, La Mala Suerte is not too far away.

As with most good science fiction, the technology is simply window dressing for a good theme.  Combining issues of race and privilege, this story is really about depression and grieving, and what human connections are really about.  It is a complicated story and is difficult to describe without producing spoilers, so suffice it to say that the ending is thought provoking.  Throw in two great heroines as well as their tender love for each other and it makes a great story.
Posted by Paul at 5:04 PM