Where I End & You Begin, by Preston Norton 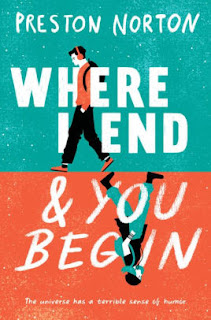 Ezra and Wynonna are not friends, but they have a very special connection:  every day or so they suddenly find themselves in each other’s bodies.  It's become more noticeable and frequent since a recent solar eclipse, but as the story unfolds, it seems that the roots of the problem go back much further.

While they are not friends, they have a connection: Ezra has a serious crush on Wynonna’s BFF Imogene.  And Wynonna turns out to be interested in Holden, who is Ezra’s best friend.


And while the body swapping is a problem to be solved, Ezra and Wynonna realize that the unique access they each have to the crush of the other provides an opportunity to tip the scales of love, if not simply put in a good word for each other.  But what ought to simply be an act of setting each other up for romantic success gets more complicated when it turns out that Imogene may actually be gay and longs after Wynonna.  That works out pretty well when Ezra is inhabiting Wynonna’s body, but spells doom for the eventual future when (Ezra and Wynonna hope) they will be back in their own bodies.  All of this confusion and chaos is set against a high school production of Twelfth Night.

Light and funny, the swapping of bodies leads to any number of humorous situations.  Unfortunately,  Norton's selection mostly is limited to erections and menstruation.  As with so many male writers, Norton doesn’t do female characters well and assumes boys should be portrayed as only interested in erections and farting.  That's a drag since there’s plenty of lost opportunity to reflect on gender differences and similarities.

Some good scenes and things get funny when the relationships start getting physical (and you never quite know who will be occupying whose body) but the story itself was too long.
Posted by Paul at 9:30 AM