Better Than the Best Plan, by Lauren Morrill 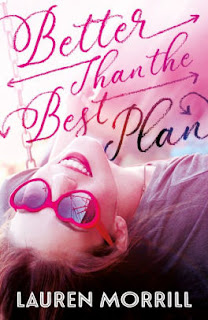 Maritzi’s mother has always had a flighty streak to her.  So when she leaves a note saying that she’s going away for six to twelve months to learn how to be a meditation and life skills coach and that seventeen year-old Maritzi should just “follow her own path,” it isn’t too surprising.  It’s going to be hard to get by, given that Maritzi isn’t exactly earning much money from her part-time job, but she’s always managed to keep things together anyway.  How much harder can it be without her Mom around?

But before Maritzi has much of an opportunity to find out, a tipped-off social worker comes and takes Maritzi into a foster home. Kris and Ryan, her foster parents, turn out to have a history with Maritzi that she didn’t even know existed. As Maritzi settles in, they all find that there is a lot to this than they ever imagined.  Lightening things up a bit, a little light romance with the boy next door also makes an appearance.

The highlight of the book is definitely the character of Maritzi herself.  She not only says that she could have taken care of herself, but she could also have had a decent job of pulling it off.  She's a particular responsible and capable young woman, yet sufficiently flawed to be believable.  It’s nice to have a story where the heroine goes to a party and doesn’t drink at all.  And while her foster mother is pretty hard on her (for entirely believably flawed reasons of her own), Maritzi probably doesn't deserve it.

But sadly the story sort of goes nowhere.  The romance is underdeveloped, the eventual inevitable show down with Mom fizzles away, and the question of whether Maritzi will live with her mother or her foster parents becomes a non-event.  It all wraps up neatly and there is not much drama to it.
Posted by Paul at 6:32 PM