I Wish You All the Best, by Mason Deaver 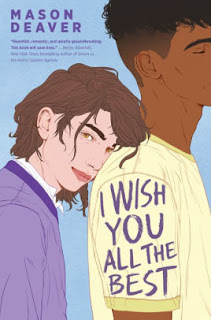 Ben decides that it is time to come clean with their parents and tell them that they are non-binary (and uses the pronoun "they").  It doesn't go well and Ben's parents literally kick them out on the streets. With few options available, Ben reaches out to Hannah, their sister (who has herself been long estranged from their family) and she takes them in.

With Hannah's help and a relocation, Ben is able to finish school and have some space to reconsider what they want.  Part of that search is a burgeoning relationship with best friend Nathan.  But being in a romance is challenging to Ben, who doesn't necessary understand how to articulate love and sexual attraction as non-binary.  From their family's abusive background, Ben's also prone to anxiety and panic attacks, all of which are aggravated by Ben's parents who struggle with understanding Ben's identity.

As a pioneering novel about non-binary teens, the book has obvious significance:  giving a voice to a group that doesn't really yet have one in YA literature.  But while it does a remarkable job at articulating issues common to young people who identify as non-binary, it largely fails as a novel.  The plot drags and meanders as it tries to cover lots of bases rather than tell a story.  It also doesn't help that Ben is not a particularly sympathetic character.  With his wide variety of issues, they come off as self-centered and insular.  That's less Ben's fault than the author's:  there's plenty of history which (if explained) could help the reader develop sympathy for Ben's struggle, but that history is stated (rather than shown), so the reader can only surmise and make assumptions.  Some discussion of Ben's identity issue prior to deciding to come out, at a minimum, would have helped.  After all, the pain of not being accepted hardly started when Ben came out.  The way the book is written, one might come to the conclusion that all Ben cares about is being addressed with the correct pronoun, but there is so much more than that going on and it is never developed.
Posted by Paul at 5:32 PM