Maybe He Just Likes You, by Barbara Dee 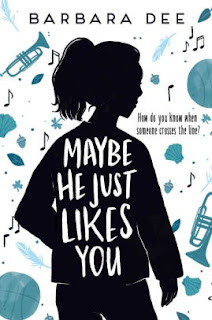 Seventh grade is presenting challenges.  The boys seem to do lots of stupid things. Some of them are just silly, but some of those things leave Mila feeling bad, like when a group of boys start touching her sweater or giving her hugs she doesn't want.  More upsetting, they won't stop even when she asks them to.

She would tell someone, but there's no one to talk to.  The female  guidance counselor is out on leave and Mila isn't comfortable talking to a man about this.  Mila's mother is having her own problems at work and Mila doesn't want to trouble her.  Maybe she's just overreacting.  The boys are just teasing anyway, right?  That's what some of her friends think.  In the end, a caring music teacher and a class in karate help Mila build the confidence necessary to address her harassers.

Excellent, albeit upsetting story about sexual harassment in middle school.  Dee has a really good feel for the social behaviors of early adolescents and the story rings true.  It's that plausibility that makes the tale so chilling.  The actions of the boys fall into that uncomfortable area between teasing and harassment that divides not just the children, but the adults as well.  It's no wonder that the kids are often struggling with defining what is acceptable and unacceptable behavior.

As usual, I didn't care for Mila's reluctance to seek help, which is a common ploy for dragging out a story, but more so than normal, I appreciated that it is her own struggle to find her voice that forms a big part of the story (and I was placated by the way that her silence was recognized as its own bad choice).  Despite that little bit of gratuitous character abuse by the author, Mila comes across as a strong and inspirational heroine.

This is an important book and one that could facilitate a lot of great discussion among younger teens (in much the way that Speak has become for slightly older readers).  It's important for girls and boys to recognize that boundaries exist at all ages and to think about what role they play in their own lives.
Posted by Paul at 5:59 PM