Notes from My Captivity, by Kathy Parks 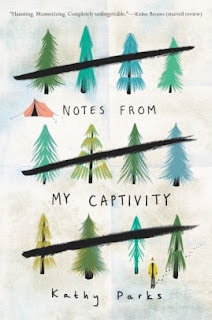 Many years ago, there was a Russian family -- the Osinovs -- who disappeared into the Siberian wilderness.  Lots of rumors abounded about them.  They became legendary for the powers they allegedly possessed, but even their existence was disputed.  And while people sought them out, no one could ever find them.

Adrienne's stepfather Dan is obsessed with finding the family.  He wrote a well-known article about them for The New York Times, but a similarly famous rebuttal has cast him into disgrace. His first attempt a few years ago to actually find them was a failure, but now he is trying again.  Seventeen year-old Adrienne is coming along, mostly to see if Dan is right, but also to exorcise some ghosts of her own.

What begins as a great adventure turns into a horror story as all of the members of the expedition are killed, except for Adrienne.  Marooned deep in Siberian forest, she is taken captive by the Osinov's, who not only exist, but also are very unhappy that she has found them.  As she gets to know the family, she finds that everything about them is more complicate than any myth or legend.

A unusual story that starts as an adventure, becomes a survival story, and eventually turns into a spiritual quest (in a sort of Heart of Darkness way).  The section is by far the most ambitious. It is also the least successful, but it gives the novel an unexpected gravitas.  Ultimately, the story is about forgiveness, but it's a long and twisted journey to reach that stage.

Parks is a good writer.  I enjoyed the Russian that is sprinkled liberally in the dialog.  And I certainly liked the character Adrienne.  The other characters appear too briefly or are too filtered by the language barrier to really make an impact.  Still, each and every one was memorable.
Posted by Paul at 3:38 PM