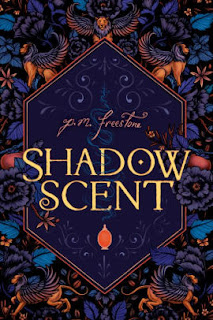 Rakel dreams of becoming a perfumer.  Her strong sense of smell and her understanding of the science of scents gives her a good chance of success.  But in her world, scents are power, so her goal is ambitious.  Ash is First Prince Nisai’s bodyguard.  When the Prince is struck down by a poison of unknown origin, fate and circumstance brings the two of them together.  Racing against the calendar, they must find a cure.  When an ancient text suggests that the antidote requires rare ingredients from all corners of the Empire, they are off on an epic quest.

A rich and densely-constructed fantasy, packed full of action.  At first, the immense detail is overwhelming and it’s hard to follow the story.  But as the dust settles, the story takes over, but only with some willful disregard of the layers and layers that the author piles on.  I love cultural detail but too much becomes distracting, particularly in the way it is used here to fill lulls in te story.  Whenever the action starts to lag, suddenly we are conveniently introduced to a another legend or an unknown town or a new monster.  What we don’t get is much character development.  The story shows us that Rakel and Ash are pawns in an imperial power play.  But within this book, they are also Firestone’s pawns.  If you like vivid and complex settings and fast-packed action, that probably won’t matter much, but I didn’t have much on which to hang.

[Disclaimer:  I received an ARC of this book in return for an honest review.  The book is slated for release on November 5, 2019]
Posted by Paul at 5:57 PM