The Grace Year, by Kim Ligget 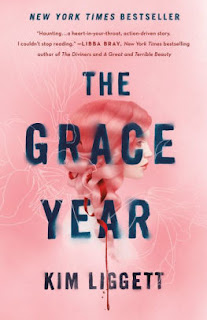 In the County, men hold all of the power.  But when a girl turns sixteen, she enters the "Grace Year" and is consumed by forces so powerful that she threatens the entire community.  To protect the rest, all sixteen year-old girls are sent away to live (or die) on an isolated island for a year.  Surrounded by “poachers” who will skin them alive if they try to escape because the flesh and blood of the girls is highly desired (and illicitly bought) by men who crave the magic that it allegedly possesses.  Those young women who survive and return will be married off or sent out to a life of labor or prostitution.

Tierney has always been her father’s daughter, willful and rebellious, and it’s gotten her into a fair share of trouble.  But it has also given her the strength and resourcefulness to survive the  ordeal.  Yet she will find that the physical harshness of exile is not the greatest challenge.  Far more dangerous than the poachers and the wilds that surround them are the girls themselves.  Petty jealousies between the girls (over who will marry at the end of the year and who will be sent into labor) face them off each other and put everyone in danger.

Part Handmaid’s Tale and part Lord of the Flies, this dark and brutal dystopia explores society's fetishization of feminine adolescence.  The treatment is gory and bloody and thoroughly unpleasant. Tierney is one of the tougher heroines you’ll ever meet, but she also a powerful leader and her aforementioned resourcefulness and intelligence serves her well. In telling her story, Ligget pulls no punches and the storytelling makes no attempt at subtlety.  The book is vivid.  It’s apparently been optioned for a movie, although one imagines that the gruesome nature of the book will need to be toned down if the target adolescent audience is going to be able to access it.


What makes the novel so interesting to me are the arguments it makes about society's treatment of sexuality and sexual inequality.  This is not just a criticism of patriarchy (as people so often misread Margaret Atwood's classic). Ligget’s point that women weaken themselves by being their own worst enemies is powerful and controversial stuff.  It fleshes out the usual anti-patriarchal dystopian by showing in Foucaldian terms the way the prisoners aid the jailers, the way that girls' gazes on each other are every bit as violent as men's.  The novel’s non-traditional ending, with its rejection of traditional literary forms is both its own rebellion against patriarchy and strikingly original.  Formidable and provocative.
Posted by Paul at 6:24 PM