This Time Will Be Different, by Misa Sugiura 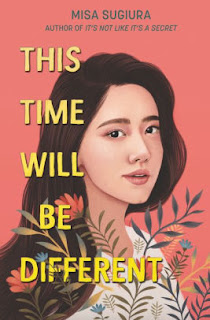 The Heart's Desire flower shop has been a key part of the Katsuyama's family for years. It carries with it a bitter legacy.  When CJ's grandfather was relocated to an internment camp during WWII, the family was forced to sell the property for next-to-nothing to the McAllisters.  After they came back, the McAllisters demanded a huge sum to reclaim it.  Others would have walked away, but for decades they worked and saved until they could buy back the property.  Katsuyamas never quit.

For CJ's grandfather and aunt, the McAllisters could never be forgiven, but CJ's mother is more pragmatic.  She shunned the family business and went into finance, ironically joining the McAllister venture capital firm, a move that threatened to split the family.

Flash forward seventeen years and now the business is not doing well. CJ's mother has negotiated a deal to sell the property back to the McAllisters.  CJ's aunt Hannah objects on principle and CJ herself sides with her aunt. The conflict reopens the old wounds, but there is no denying that the flower shop is losing money.  And while Hannah and CJ sentimentally hold fast, Mom's relentless realism is winning out.

The issue broadens when the local newspaper uncovers that old man McAllister pulled the same property trick on literally hundreds of Japanese Americans -- using racist rhetoric as a smokescreen to enrich himself by swindling them.  The money he raised in the process become the foundation for the McAllisters fortune and was used to buy the family prestige.  One of the most damning legacies of this is the fact that CJ's high school is named after the man.  Inspired by the story and driven by her personal vendetta, CJ organizes a student movement to get the school renamed, an act that threatens her Mom's career plans.

Intertwined with this is CJ's conflict with a publicity-seeking white girl named Brynn, Brynn's complicated relationship with CJ's best friend Emily, CJ's own romantic issues, and CJ's struggle to win her mother's respect.  Teen pregnancy and whether to raise the baby or have an abortion figure in prominently as well.  So, it's obviously a rather complex story to summarize

Despite the multitude of stories being told, the novel is surprisingly fluid and readable.  For the most part the various subplots fit in to the main story (although the teen pregnancy subplot is ultimately peripheral and probably could have been cut).  Sugiura has previously shown an affinity to writing about Japanese Internment and has found a creative way here to bring contemporary relevance to the topic.  The character of Brynn gives her the opportunity to discuss White Privilege effectively, albeit the issue seemed too blithely resolved.

Where Sugiura struggles is in depicting conflict and conflicting views.  In general, all of the conflicts in this book are resolved the same way -- characters spar and then meet up later, literally say "I fucked up," and then move on.  There's not much debate or grayness allowed (presumably because Sugiura doesn't see any).  It's thus a bit of a rude surprise that the ending is so bittersweet and unresolved.  In this novel the characters can all agree to live together, but the outside world is still unfair -- there's no map to resolution and Sugiura apparently can't imagine one.  That's ultimately unsatisfying.
Posted by Paul at 5:42 PM