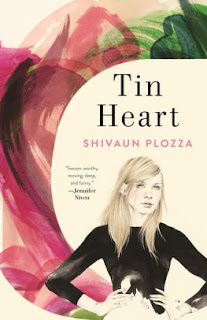 Marlowe is a recent heart transplant recipient with an odd and quirky family.  She has a militant vegan mother and a little brother named Pip who likes to dress up (usually as female literary figures).  Her mother's nemesis is the butcher shop next door and the whole family engages in dramatic guerrilla protests against the store and its owner.

Marlowe has her own private vendetta with the butcher's son, which gradually grows (as these things do in romance books) into something more, much to her mother's horror.

But the ostensible main story of the novel is Marlowe's desire to learn more about the donor of her heart. She tries reaching out to the donor's family, but they don't want any contact.  Obsessed, Marlowe can't let that sit and tracks them down anyway, becoming friends with the donor's sister, Carmen.  This becomes awkward when Marlowe finally has to come clean about the connection that Marlowe shares with her.

Aussie YA is usually a bit strange and this book meets that expectation. The weird characters (not just the cross-dressing little brother, but all of the characters) is part of it, but the bigger issue is the lack of plot.  There are a lot of digressions and plenty of subplots, but the story doesn't add up to much.  Conflicts with brother, mother, Carmen, and the butcher boyfriend drift along, but it doesn't go anywhere and we end up pretty much where we started.
Posted by Paul at 7:08 PM