You Must Not Miss, by Katrina Leno 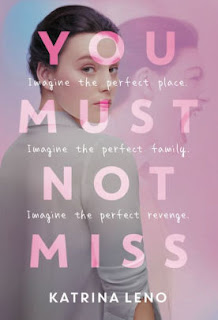 Magpie has a lonely life.  Her alcoholic mother is frequently away.  Her sister, frustrated with taking care of Mom, moved out and refuses to come back home.  Magpie's circle of friends has been reduced to Ben and Clare and Magpie's social capital is spent. As soon as she turns eighteen, she plans to move out of the town of Farther.

But before that move happens, something strange and wonderful occurs.  As an escape, Magpie has been creating an imaginary world in her notebook.  It’s a perfect world with friends who like her, mothers who don’t drink, and everything is great.  She calls the world "Near." Fantasy is one thing, but one day she discovers that she can actually visit Near through the woodshed in the backyard and it is every bit as perfect as she imagined in her notebook.

But as her fantasy world of Near becomes more and more real, Magpie finds it has a dark side, which can be used not only for escape but also for revenge.  With all the anger that Magpie carries with her, the temptation of such power is too much.  Despite numerous warnings that the costs of using Near to inflict suffering on her enemies is dangerous, she becomes obsessed with striking back at her tormentors.

Thus, what starts as Secret Garden becomes Carrie in this strange and blood-thirsty tale of revenge.  I wasn’t sure in the end what the point of it all was.  Magpie, consumed by her anger and frustration achieves some sort of peace in the end, but it doesn’t really have a huge impact.  Her bloodthirstiness and cruelty pretty much shuts down anything sympathetic about her.  I didn’t like her and found her cruel and ultimately pathetic.  That even she judges herself that way in the end was little comfort from this dark piece.
Posted by Paul at 6:42 PM