Girls on the Verge, by Sharon Biggs Waller 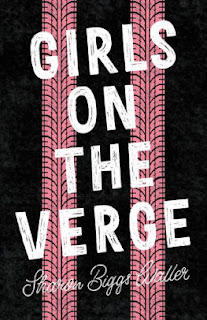 When Camille finds out that she is pregnant, she’s pretty certain from the start that she wants to terminate her pregnancy.  However, getting an abortion as a seventeen-year-old in Texas in 2014 is no easy matter.  She struggles with doctors and judges, traveling across the state, across the border to Mexico, and finally on an epic road trip to New Mexico.  This adventure creates a quirky road story.  Accompanied by her best friend Bea (who supports her but feels conflicted by her own pro-life beliefs) and Annabelle (who feels driven to help Camille figure this whole thing out for reasons of her own), the three young women find that nothing about America's culture wars is simple.

The story itself is really a bare-bones skeleton on which Waller layers a variety of legal facts and anecdotes in order to show how the politics of abortion has turned the experience of seeking one into a surreal and hellish landscape.  Given my beliefs, I have no personal issue with the author’s ideology and I even see the value in opening some eyes about how much politics has subverted things, but this is not a book that is going to be read through to the end by anyone with doubts about a woman’s fundamental right to choose.  And that raises a question about its utility.

As a story, there is not a lot here.  The girls have interesting differences and there is some perfunctory effort to allow them to grow a little during the story.  Some drama occurs with various challenges they experience (harassment, violence, and a brush or two with the Law).  But aside from the three girls, the other characters are stereotypes and lack substance.  Overall, the book comes across as a screed…to an audience who is already converted.
Posted by Paul at 10:38 AM