Lie to Me, by Kaitlin Ward 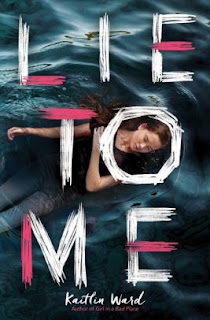 Amelia is lucky to have survived her fall into the river.  All of which has folks shaking their heads and wondering why she was fooling around on the wrong side of the guardrail in the first place (although some folks think it was suicide).  Amelia also wonders what happened.  She's never been clumsy and the whole thing seems off.  While she can't remember much of the incident, due to the concussion she endured, she has a faint memory of being pushed.

It is easy to discount those notions until another girl is found in the same river (allegedly from jumping in as well).  Who would be doing this?  Who wants her dead and these other girls dead and why?  Amelia takes a hard look around her:  at her friends, her boyfriend, the creepy neighbor across the street, but nothing comes together.  As the body count grows, Amelia no longer knows who is safe and who is not.

Average mystery that has fine delivery, but suffers from a bloated story.  It feels like a short story that the author enlarged to novel length with trivial activities -- shopping trips, general socializing, school activities, and so on -- none of which really feed into the plot.  Of course, given the genre, some of it is there to mislead the reader, but a lot feels unnecessary.  As I read it, I found myself willing the filler to end so I could get back to the real story.


(Disclaimer:  I received an ARC from the publisher in exchange for an unbiased and independent review.  The book is scheduled for release on January 7th.)
Posted by Paul at 9:26 AM