The Black Coats, by Colleen Oakes 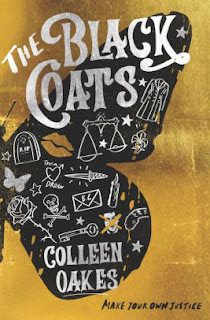 It's been months since Natalie was murdered and her suspected murderer set free for lack of evidence.  The world has moved on, but her cousin Thea can't.  Lost in grief, she barely functions.

Then one day she receives a mysterious letter.  Intrigued, she follows its instructions and finds herself at an old house.  There, she learns that she has been invited to join the Black Coats.

Founded by a woman who was raped and couldn't get her assailant punished, the Black Coats are a secret organization of young women who engage in "balancings" (vigilante justice against the accused).  Recruiting only from victims or friends of victims, the young women in the group are personally driven to the cause of punishing men who escape justice because the victims were women.  Thea finds herself training in martial arts and covert ops with four other girls, learning the ropes and engaging in their own balancings.

Participation gives her confidence and Thea starts to bloom again at home and school, even sparking a romance.  But as the girls get more involved in the organization, Thea begins to have doubts about the "justice" that they are dispensing.  These doubts grow larger when the organization reveals its darker side.

While the premise raises eyebrows and the morality of vigilante justice was giving me doubts about this book early, it all begins in humor and fun.  Certainly the idea of young women gaining confidence and breaking free of debilitating grief is an empowering idea.  And, at least at first, a great deal of stress is placed on the idea that murder is out of the picture.  I felt sympathy for and interest in the characters and didn't stress over the violence.  Slipping a serial rapist a roofie actually seemed quite poetic to me.

As things turn dark and those earlier promises are tossed aside (and the body count starts to grow), the empowering themes are largely lost.  The book itself loses its way, forgoing the empowerment for psychopathy.  Oakes says in her notes that this book rose from the ashes of another about a girl recovering from grief.  That seems a shame as a more serious book would have been more meaningful.  By the last fifty pages of this one, as the violence grows and becomes largely girl-on-girl, I pretty much lost interest in this story.
Posted by Paul at 1:37 PM