You Asked for Perfect, by Laura Silverman 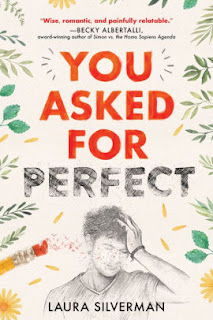 Ariel has managed to maintain a straight-A all-AP-courses workload almost all of the way through high school.  But in his final year, there just no longer seems to be enough time to fit it all in.  Even with tutoring from his friend (and potential boyfriend) Amir, it seems that as soon as he fixes one problem, another one pops up.  Trying to do everything and do it all perfectly is simply too much but he's so invested in being perfect that he doesn't feel he can stop trying.  Eventually, it all comes to a head, but in the end it takes a family tragedy to reset Ariel’s priorities.  These are immediately tested as he has to choose between his dreams and his friends.

The book has two notable elements:  the casual approach it takes to Ariel’s bisexuality and the strong role that religion (Judiaism, in this case) plays in Ariel’s life.  For readers used to sexuality being the focus of a book, the non-issue of Ariel’s sexuality is ironically notable for not being noted  Have we really normalized to that point or is Silverman making a point by playing it up?  As for the prominent role of faith, while Judaism is no foreigner to YA, the positive role of religion is a stand out and welcome.

The story however is pedestrian.  Ariel’s overworking and stressful lifestyle is blatant.  His eventual burnout is no surprise and the solution too straightforward.  The heavy handling of the topic would be more appropriate for a middle reader but seems preachy for a teen audience.
Posted by Paul at 10:47 AM