Call It What You Want, by Brigid Kemmerer 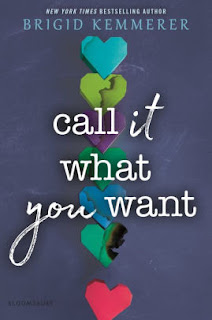 Rob lost everything when his Dad was caught embezzling money from his clients' investment accounts.  Most of their possessions were seized.  Rob became an outcast at school as everyone assumed he knew about it.  Meanwhile, his father escaped in his own way (with a failed suicide attempt that left him in a vegetative state).

Maegen got caught last year cheating on the SATs and caused an entire classroom's worth of exams to be invalidated.  But that scandal pales compared with her star older sister coming home from school pregnant and unsure about what she wants to do about it.  Maegan's family life has grown unbearable.

Both Rob and Maegan now lie at the bottom of the social hierarchy, but neither of them have any reason to associate with the other.  It takes a group project in Calculus to bring them together and help them discover that they have much in common.  One thing they have both come to understand is, as desperate as things seem for themselves, there are others who are in greater need.  They can make a difference by doing good deeds.  While they don't have track records for making good choices, now that are are trying to do so, they find that it is not so easy to know what is right.

A stirring and moving story of two flawed, but resilient young people.  Supported by complex and well developed supporting characters, Kemmerer has created a very strong story of love and loyalty.  Whether it's the sisterly bond between Maegan and her pregnant older sister, between Rob and his former best friend Conner, or even between the children and their parents, there's so much interesting stuff going on here.  And that doesn't even begin to touch on the complex dynamics between Rob and Maegan, who fluctuate between distrust, love, betrayal, and forgiveness in one of the more fascinating pas de deux in YA.  It's a wonderful thing to read a story where no one really acts to type and there's a believable surprise around every page turn.  I wasn't so hot on the plot twists at the end involving the scandal that got Rob's father in trouble, but that is a minor quibble for a novel when the characters themselves are so fascinating.
Posted by Paul at 3:15 PM