Forward Me Back to You, by Mitali Perkins 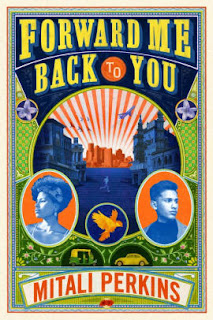 Robin is drifting, not really sure what he wants to do with his life. He feels rootless.  Adopted, he wonders why his Indian birth mother gave him away.  Kat, on the other hand, knows exactly what she's running from:  a boy at her school who attacked her.  She's a fighter (a fact which actually saved her during the assault) but the school's turned against her and she's come to stay with a friend of her martial arts trainer in Boston.

Fairly soon after arriving, Robin and Kat learn of a unique opportunity to spend the summer in Kolkata, working at an organization that rescues children from sex traffickers.  Robin realizes this might be a chance to search for his birth mother and make peace with his past.  For Kat, it is a dream of sharing her knowledge of self-defense with other girls who have suffered from the hands of men.  But once Robin and Kat reach Kolkata, they realize how far out of their depth they are.

A unique story of young people who are struggling with their past and find that what they really need is so much different from what they thought.  They both start off arrogant, but they go through some humbling readjustments and eventually adapt.  The result is a satisfying story of growth and maturation.  The characters are distinct and have clear personalities (ranging from Kat's tendency to describe everyone she meets as animals to Robin's embrace of his Bengali heritage). In sum a well-developed story and strong characters are combined with the exotic locale and a true respect for Bengali culture (as well as a little comic relief) to created a readable and enjoyable adventure.
Posted by Paul at 6:27 PM

Thanks for your review of this book. I've always enjoyed reading Mitali Perkins and although I've been meaning to read, but just didn't get to it. So now it's time to go to the library and get it. Happy New Year!