Have a Little Faith in Me, by Sonia Hartl 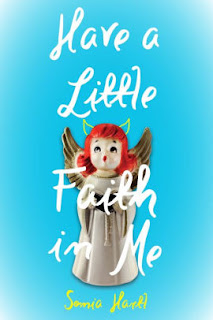 CeCe lost Ethan.  After succumbing to pressure from him to have sex, he decided to break things off.  He says he needs to re-connect with his faith and is going away to Summer Bible camp.  CeCe, whose faith in Jesus was never very strong, is convinced that by following him there and proving she can be a good Christian too, that she’ll win him back.  Her best friend and neighbor Paul tries to convince her that this is a very bad idea.  When he fails to do so, he announces that he’ll go too in order to help.

At camp, CeCe is definitely in over her head.  Her ideas clash repeatedly with the staff and the campers, but her biggest shock is finding that Ethan has a girlfriend at camp.  Desperate, she gets Paul to agree to pretend to be her new boyfriend and make Ethan jealous.  It works so well that CeCe and Paul discover they have feelings for each other.  It culminates in a stand off at a campfire confessional.

So far, so predictable.  I twitched quite a bit at the depiction of organized Christianity, but that’s pretty common with writers who want a group that’s still OK to trash.  But the great climactic fireside showdown occurs on page 185 and there are almost 150 MORE PAGES TO GO!!  What on earth are they going to do with the rest of the book?

The answer is to embark on a treatise about sex and consent.  The girls at the camp, shocked by what CeCe has endured launch into an extended dialogue about sexual mishaps, questions, and consent.  Much of it is fine and the material is sound, but it is so dense that it largely comes across as a textbook.

The book's popularity may be boosted by a pretty explicit sex scene at the end that the sex education material seems to be building up for.  It contains probably the most thorough by-the-book explicit consensual sexual encounter ever recorded in a YA (or any other) book.  And there is a stress on verbalized consent (i.e., implicit consent does not count so everything must be spoken aloud), which will raise eyebrows. There’s nothing intrinsically wrong with teaching that good sex is consensual sex, but it has so little to do with the first half of the book that it felt like a hidden agenda.

It’s a little hard to review the book since it is really two books – one fiction and the other non-fiction.
The characters start as young people but largely become mouthpieces in the end.  CeCe and Paul get the best treatment, but that’s because they get to be the models for perfect sex.  In the first half of the novel, I found them much more interesting.  The end is a mess as the story shifts in several different directions, but finally gets the kids back home and into each other’s arms.
Posted by Paul at 12:20 PM