Michigan vs the Boys, by Carrie S. Allen 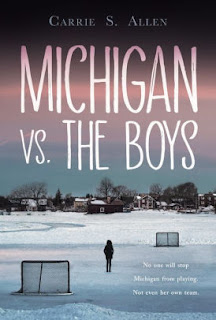 Michigan had just learned that she was going to be this year's girl's hockey assistant captain when it is announced that the team is being shuttered because of budget cuts in the school district.  Michigan has to figure out some way to stay on the ice.  But in her small town in the Upper Peninsula what opportunities are there to play?

The obvious solution is to try out for the boy’s team.  But in her town, that doesn’t go down well.  She finds herself the target of discrimination (some subtle, some overt) and hazing.  As the threats and attacks grow more serious, Michigan has to ask herself how much getting to play is really worth it?

Full of lots of hockey action, fans of the sport will enjoy themselves. However, I’m fairly ignorant about hockey so most of the play-by-play went over my head.  As a story, I found the book gripping and engaging.  There’s some fairly intense scenes of violence, but that merely reinforces how tough Michigan is and how hard she has to fight.  The ultimate pay off at the end is, of course, very rewarding.
Posted by Paul at 2:25 PM