The Year We Fell From Space, by Amy Sarig King 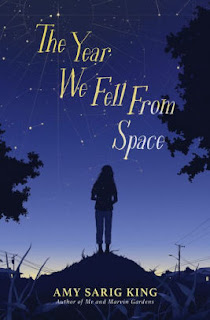 Liberty's got a plan to redesign the constellations.  She's going to modernize them by asking people to look at unlabeled star maps she creates and describe what shapes they see.  She thinks it will get people as excited about the stars as she is.  Every night, she goes out and creates the detailed maps.  One night, she witnesses a meteorite enter the atmosphere.  With devastating impact, it lands near her (an unbelievably rare event) shattering windows around the neighborhood.  But the damage is superficial and Liberty's home has already been destroyed when her father has moved out a few days before.

While this book could be seen as just another middle grade story about divorce, it's significantly more complicated.  Liberty and her father both suffer from depression.  Her younger sister and her mother have emotional issues of their own.  And, as a result,  no one is an entirely reliable narrator.  The resulting insightful tale takes a very honest look at the dissolution of marriage and redefinition of family in a way that all ages will understand.  Hardly just "adult talk," Liberty observes, each of them (parents and children) have a "quarter share in the divorce."

I really liked this novel.  It is a very well-trod topic and hardly one that would seem to need a new treatment, but King has a gentle way of handling what Liberty calls "irrational" behavior as her characters (both children and adult) behave in authentically imperfect ways.  And the message that reflection, communication, and (ultimately) forgiveness is crucial for all of us is uplifting.
Posted by Paul at 5:43 PM