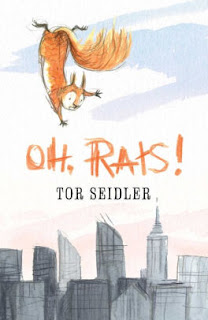 Phoenix is one impressive squirrel.  The largest in his litter, his luxurious fur and big fluffy tail make him a great catch.  But unfortunately, that vanity costs him when he is caught by a hawk instead and swept away from his New Jersey home.  Making it through a series of near-death experiences, Phoenix finds himself in New York City, but without his fur and his tail now bare.  He looks almost like a rat!

While the local rats don't really trust him, he proves to be their good friend, helping to protect the abandoned wharf they call home from a greedy real estate developer.  It will take serious climbing, inventiveness, help from a bird of prey, and a few sticks of dynamite, but Phoenix is determined to save the day.  In the end, he finds that home is where you make it, even if you are a hairless squirrel from Jersey!

On a whim, I picked this up from the new middle school bookshelf.  It looked cute and even a bit funny.   It proved to be strange and more than a little bit dark. It is cute, but not very funny.  I also fail to see how it really qualifies as a book for middle schoolers, although I'm at a loss to say what the audience should be.  It's not a bad adventure, but between the violence, some mature themes (alcoholism, family abandonment, etc.) it doesn't really seem age appropriate. But at the same time, the talking animal genre tends to skew young.
Posted by Paul at 8:05 PM