The Candle and the Flame, by Nafiza Azad 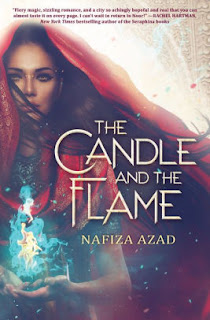 The city of Noor lies in the crossroads, a mixture of Arab, Indian, and Chinese cultures.  Nearly destroyed when a chaotic band of Djinn attacked the city and slew almost everyone, it has been repopulated by refugees from many lands.  Thus creating a place of many cultures, faiths, and traditions.  But it is not a place of peace.  Rival factions of Djinn and humans struggle to gain control of the region.  A dizzying assortment of nobles and commoners play a part in this vivid and complex setting, key among them is Fatima, one of the few survivors of the attack.  She now bears special powers that even she doesn't fully understand, which could bring peace or annihilation to the people.

Strikingly original amalgam of cultures and ideas, Azad has drawn on a wide palate to create this crossroads world that combines not only different world cultures, but also different ideas of magic and religion.  The story takes liberties with many of these in its mashup and introduces a matriarchy and strong women characters that fit loosely on top of  the traditions it invokes.  That can at times feel revisionist, but it fits in smoothly.  Azad triumphs in cultural detail, obviously in love with the food, clothing, and smells of this world.  No meal takes place without a detailed description of what is being served.  No clothing is worn without extensive description of what is being worn and how it is accessorized.  If you are into that and have the patience to spend a lot of time in the Glossary (helpfully provided at the end of the book), then this is a rewarding read.  For more casual readers, it can seem like cultural overload and one longs for more story and less culture.
Posted by Paul at 10:59 AM