The Night of Your Life, by Lydia Sharp 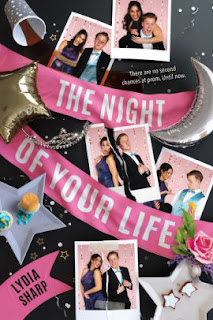 It’s almost graduation and JJ has his senior prom to look forward to.  He’s taking his best friend Lucy with him and it’s bittersweet because when they graduate she will leave for school in Italy.  To complicate matters, he’s also taking Jenna – the recently ex-girlfriend of Blair and High School royalty -- who needs company.  It’s just as friend, but JJ could never deny that he would like a chance with her (even if he is strangely uncomfortable admitting as much in front of Lucy).

So far, so typical YA prom/romance.  But there’s an additional dimension.  Lucy and JJ’s just completed their joint science project -- a time machine -- which they actually got to work.  Sort of.  While all there preparations went well, the thing mysteriously failed during their presentation.  Or so they thought.  In fact, it triggered a time loop/glitch which causes JJ to relive again and again what will become the prom night from hell.

A story so much like Groundhog Day that there’s even a token groundhog in the story, this quirky time travel adventure may be all over the place but it is surprisingly entertaining and ultimately touching.  It turns out that Bill Murray really missed the boat – the purpose of repeating something again and again is not to get it right or become a better person:  it is to totally transcend the rules of the universe and embrace what you really expect from the world.  In sum, what JJ will ultimately learn is that we make out own fate.  That surprisingly deep lesson combines with stand out characters to create a fun read which breaks the mold of the calcified genres it has chosen.  Who knew a prom time-travel adventure could be so interesting?

[Discliamer:  I received an ARC from the publisher in exchange for an unbiased review.  The book is slated for release on March 3, 2020.]
Posted by Paul at 12:29 PM