The Odds of Loving Grover Cleveland, by Rebekah Crane 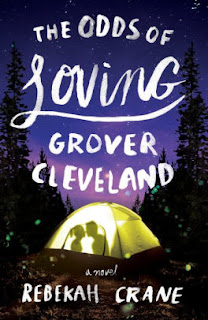 When Zander shows up at Camp Padua, a summer retreat for at-risk teens, she insists that there is nothing wrong with her.  That makes her stand out.  Everyone knows that Cassie is anorexic, Bek is a liar, and Grover is just odd.  But the most that can be said about Zander at first is she doesn't like apples.

Faced with a summer of group therapy and outdoor games that is about to change.  Grover's, convinced that he is destined to become schizophrenic, and similarly persistent that Zander and he are a couple.  Amidst Cassie's snarky observations about just about everyone are a few pointed ones at Zander that show that she sees far more than anyone else at Camp.  And Zander will open up and address the feelings and behavior that wound her up here.

A familiar story of institutionalized teens healing gets a lift in this case from some fresh characters.  Cassie and Grover are the most colorful and provide excellent soundingboards for Zander.  Character growth is a given in this genre but follows a less predictable arc that gives us some suspense and a better pay off in the end.  The language is smart and mixes believably vulnerable adolescence with intelligence.  A pleasant enough read but not terribly noteworthy.
Posted by Paul at 2:40 PM